Many Australians and New Zealanders still assume that current animal welfare laws provide animals with sufficient protection from human mistreatment, that cruelty is the exception and that, when exposed, perpetrators are prosecuted. They are wrong on all counts.

Animal Law in Australasia: A New Dialogue, in its first edition, highlighted shortcomings in the existing framework and suggested ways in which the law could be improved. It was well-received, with critics calling it “a book to be applauded” (Laura Donellan, Journal of Animal Ethics), “a must for anyone … interested in animal rights and animal welfare” (Susan Briggs, Release Magazine) and even “a book that changed my life” (The Honourable Michael Kirby).

Animal Law in Australasia: Continuing the Dialogue builds upon the significant developments in animal law that have occurred since 2009 and also addresses emerging areas of concern, with eleven new chapters.

“The book is compelling reading for anyone with a strong interest in animal welfare, but is also a commendable read for students of jurisprudence, and those interested in a broader understanding of the concept of the law and the way in which legal regulation can promote social good.”

A second edition of Animal Law in Australasia was officially launched in July 2013. Steven White and I were joined by Celeste Black of the University of Sydney, who co-edited the book.

Our hope is to “continue the dialogue” and build upon the success of the first edition by exploring a host of new subjects relevant to animal law in Australia and New Zealand. We are very proud of this project.

“Contributors to the text are from Australia and New Zealand and include academics, practitioners and politicians. Some of the topics covered include farm animals and welfare law, the regulation of companion animals, the use of animals in research, dog control legislation, animals in entertainment, the use of codes in animal welfare, the application of welfare standards to fish, the impact of WTO regulation on domestic efforts to control cruelty, and Australia’s regulatory regime for live exports. The text raises interesting philosophical and regulatory issues affecting domestic, non-domestic and wild animals. This thought-provoking and pioneering text will absorb those interested in theories about animal rights.”

“For those interested in or working in areas of animal welfare legislation, policy, codes and guidelines, enactment, monitoring or lobbying, the book offers valuable information and insights. Whether your purpose is to understand those calling for major changes in our legislative approach to animal welfare or to work more effectively to that end, you will find value here.”

“This compilation is the first major Australasian textbook to be released in the burgeoning field of animal law … it presents the substantive law one would expect of a textbook … the contributors include academics in law, science and politics, practising lawyers, in-house counsel for animal protection organisations and a politician. Between them they cover issues practical and theoretical, local and international, and canvass the legal regulation (or more accurately deregulation) of cruelty across a range of sectors, such as farming, science and sport. … This book will doubtless provoke further debate and critical analysis as public consciousness of the plight of animals increases.”

“Animal Law in Australasia is a comprehensive effort with 17 chapters by 15 contributors. Despite the number of authors there is a consistency of style throughout that is testimony to the efforts of the editors. It is refreshing, then, to see a book such as this – scholarly in approach but accessible in style – refining the quality of discourse and framing, as the subtitle proposes, a new dialogue.”

“Animal Law in Australasia is a highly informative and well researched text on the current Australian and New Zealand law regulating the interaction between humans and animals. It is an ideal reference as it provides extensive footnotes, a case table, a legislation table and a detailed index. It would be of general interest to anyone interested in the field of animal law, and animal protection law more specifically, but readers without legal training may find certain sections less accessible…this first edition does an excellent job of examining a broad range of legal issues in relation to animals and provides an invaluable resource.”

“For the sake of the hundreds of millions of animals that suffer incalculably in Australia and New Zealand each year, hopefully this book will serve as a catalyst for positive change. The book is a heavy and often dispiriting real, but its underlying message is an optimistic one. By drawing upon the best principles of justice and compassion that underlie liberal democracy, Animal Law in Australasia shines a beacon of light for our legislators and judges to follow if they are brave enough to withstand the sheer power of the opposing force.” 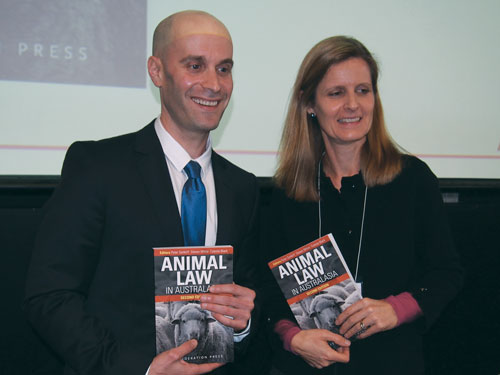 With my co-editor, Dr Celeste Black, at the Sydney book launch in July 2013.

Contributions from Australian, New Zealand and international academics and practitioners cover topics ranging from the explanation of basic concepts of animal protection and theoretical underpinnings of animal law to specific matters of interest including: